The Origin and Diversification of Snakes 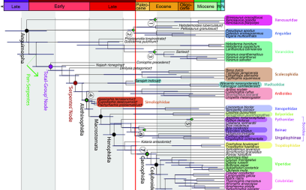 Snakes have always captured the imagination of humans. Their fearsome reputation, and great diversity — with more than 3,400 living species — make them one of the most recognizable groups of living vertebrate animals. Yet little has been known about how, where, and when modern snakes emerged.

Recently Allison Hsiang and a team from Jacques Gauthier’s group analyzed genomic data from snakes, modern snake anatomy, and new information from the fossil record to find answers. The researchers assembled the most comprehensive dataset to date combining genetic and anatomical data from living and fossil snakes allowing them to evaluate the early evolutionary history of snakes.  To do this, the researchers used cutting edge computational techniques, in part on Yale’s High Performance Computing (HPC) infrastructure.  In doing so, they generated a family tree for both living and extinct snakes, illuminating major patterns that have played out across snake evolutionary history.

We generated the first comprehensive reconstruction of what the ancestral snake was like,” said Dr. Hsiang “This reconstruction was unique in that it combined extensive morphological data as well as genomic data into a single family tree”. “The use of Yale’s HPC infrastructure allowed us to reduce computing time from days to hours.”

In the end the researchers were able to determine the original snakes were forest dwellers and most likely had vestigial hind limbs.  “We infer that the most recent common ancestor of all snakes was a nocturnal, stealth-hunting predator targeting relatively large prey, and most likely would have lived in forested ecosystems in the Southern Hemisphere,” Hsiang said.

“Primate brains, including those of humans, are hard-wired to attend to serpents, and with good reason,” said Professor Gauthier. “Our natural and adaptive attention to snakes makes the question of their evolutionary origin especially intriguing.”

Support for the research came from the Yale Peabody Museum of Natural History, the Smithsonian Institution, and the Canadian Natural Sciences and Engineering Research Council.