The Origin and Application of Single-Molecule Rectification 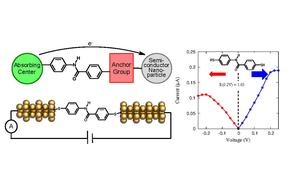 Understanding how current passes through molecules in dye-sensitized solar cells (DSSCs) is important to find viable solutions to the renewable energy problem.  The research group lead by Professor Victor S. Batista is focused on computational studies of single molecule rectifiers to advance fundamental understanding in the field.  Working with collaborators at the Energy Science Institute and at Columbia University the team hopes to synthesize, characterize and assemble efficient rectifiers that could boost the overall performance of photoconversion.

In DSSCs, the photoconversion mechanism is initiated by photoexcitation of dye molecules that are covalently bound to nanoporous semiconductor surfaces (e.g., TiO2). The attachment is based on molecular linkers and anchoring groups. The photoexcited electrons are typically transferred through the molecular linkers and are then injected into the semiconductor. Reducing back electron transfer is essential to achieve high photoconversion efficiency. Linkers with rectification properties are critical components since they allow electrons to flow into the semiconductor and at the same time suppress detrimental recombination with the dye.

Computational chemistry methods can elucidate the underlying mechanism of electron transport responsible for rectification in such small molecules.   In a recent discovery, the team found that rectification can be determined by the asymmetry of a single frontier-orbital (i.e., an orbital that can easily exchange electrons under low bias).  Another advance involved discerning the role of molecular conformation as a design element critical for rectification and high-conductance. These advances in fundamental understanding are particularly valuable to the design and optimization of promising molecular components of DSSCs that are synthesized, characterized and tested by collaborators.

The Yale high-performance computing facilities are critical for this research effort and provide essential computing power for every step of the project.  The computational tasks involve calculations of electrical transport properties and exhaustive screening of series of molecules amenable to synthesis and characterization, leading the development of experimental work to the most promising molecular candidates.