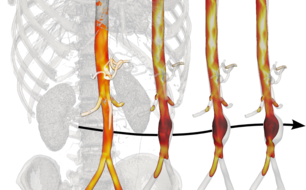 The Continuum Biomechanics Lab in the Department of Biomedical Engineering at Yale is committed to understanding better the mechanobiological mechanisms by which biomechanical forces regulate processes of adaptation and disease progression in arteries. The lab relies heavily on large scale computing to simulate realistic distributions of blood pressures and flows as well as wall stress fields within large segments of the vasculature.

Figure 1. Mechanically and hemodynamically-driven growth and remodeling models of disease progression could help improving clinical decision-making providing both short and long-term indications on the future course of disease.

These results, in turn, drive novel kinetic models that describe the evolution of geometry, microstructure, and material properties of the arterial wall and, if applicable, an associated intraluminal or intramural blood clot. Currently active projects focus on diverse conditions that are responsible for significant mortality and morbidity, including thoracic aortic dissections, abdominal aortic aneurysms, and vascular stiffening in hypertension or aging, all of which are characterized by altered mechanics [Taylor and Humphrey, 2009]

Through a strong collaboration between Biomedical Engineering (Humphrey) and the Department of Surgery at the Yale School of Medicine (Tellides), large databases of de-identified high resolution medical images (mainly CT and MR scans) are processed using advanced segmentation algorithms to build subject-specific geometric models of extended portions of the vasculature. To solve Navier-Stokes equations for the hemodynamics plus coupled quasi-static equilibrium equations for the arterial wall, these geometric domains are subdivided into several millions of elements while the unsteadiness due to the cardiac cycle requires 40,000 or more timesteps per cycle. The computational infrastructure at Yale plus additional resources available through the XSEDE consortium are thus instrumental, for they allow simulations to run in parallel on several hundred cores. Only in this way can computationally intensive post-processing operations be performed that enrich the analyses in terms of quantifiable parameters of biological relevance. For example, particular simulations advect millions of massless particles according to fluid simulations over several cardiac cycles to simulate history-dependent biological phenomena such as shear-induced platelet activation and mixing that are thought to play a significant role in in the formation of blood clots.

Such results have led, for example, PhD student Paolo Di Achille to the identification of a novel metric for thrombus initiation that integrates information from the hemodynamics and cell biology to capture both the reasons why thrombus does not form under normal conditions in complex regions of the human vasculature and why it yet forms in certain complex aneurysms, but not others [Di Achille, Tellides, Figueroa and Humphrey, 2014].

This research is funded, in part, by grants from the NIH (R01 HL105297, R01 HL086418, and U01 HL116323) as well as grants from the National Science Foundation that partially funded the acquisition of the computational facilities of the Yale Center for Research Computing (CNS 08-21132) and funded the Extreme Science and Engineering Discovery Environment (XSEDE, ACI-1053575).