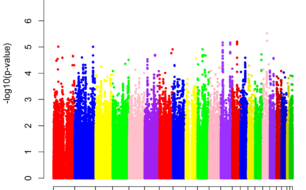 Jews have been found to have a higher risk of pancreatic cancer compared to non-Jewish whites. Our research explored a genetic basis for this higher risk. We examined the existing significant loci from the large white-European Pancreatic Cancer Cohort and Case-Control Consortium/Pancreatic Cancer Case-Control Consortium (PanScan/PanC4) genome-wide association studies (GWASes) and performed the first GWAS of pancreatic cancer in the higher-risk Jewish population.  Among Jewish subjects, we found a novel genome-wide significant association with pancreatic cancer on chromosome 19p12 and a suggestive relatively independent association on 19p13.3, which may explain much of the increased risk of pancreatic cancer in the Jewish population compared to the non-Jewish white European population. Our findings are published in Cancer Epidemiology, Biomarkers & Prevention and Human Genetics1,2.

The Yale Center for Research Computing (YCRC) supported our analyses, and the Yale high performance computing (HPC) cluster enabled us to analyze and store large amounts genetic data. On the HPC cluster, we were able to genetically identify Jewish subjects from over 50,000 white-European subjects, impute missing genotypes between different genotyping platforms, and run a pancreatic cancer GWAS in Jewish subjects. If our findings are further validated, testing of these loci should be considered for Jewish individuals with family histories of pancreatic cancer not otherwise explained by known predisposition mutations.