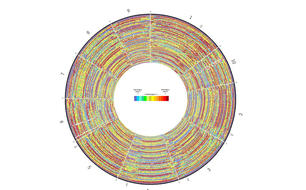 Looming food security issues over the next decade will require new sources of genetic diversity and innovations in agriculture technologies. Prof. Stephen Dellaporta is a Professor of Molecular, Cellular & Developmental Biology at Yale, whose research group’s interest is to identify novel genetic diversity and apply genomic and computational strategies to best utilize these resources for crop improvement and trait identification. Existing sources of crop diversity is limited due to major genetic bottlenecks associated with domestication and breeding. Genetic bottlenecks first started approximately 10,000 years ago when wild species, such as maize in the Americas and rice in Asia, were domesticated. Domestication captured a limited extent of genetic variation found in the wild gene pool. The erosion of genetic diversity continued for centuries, whereby farmers and breeders continued to eliminate much of the undesirable variation found in the wild, while selecting for agronomic traits such as yield, stress resistance, and regional adaptability. Recent bottlenecks continue with the advent of modern crop improvement technologies, including marker-assisted breeding that has led to the rapid development of high-yielding elite varieties suitable for modern agricultural practices but further limited in genetic diversity.

Genetic erosion of diversity translates to greater susceptibility to environmental stresses and pathogens, especially to newly emerging ones. Technology provides solutions to reversing this problem. For instance, biotechnology can improve food security by introducing novel genetic variation, an approach that has been extremely valuable for the introduction of herbicide tolerance and resistance genes to combat pathogens. A second complementary or alternative is to identify key agronomic traits by exploiting the natural genetic diversity found in wild relatives and diversity germplasm of major crop species.  This diversity represents a virtually unlimited “genetic reservoir” of valuable traits such as durable resistance to abiotic and biotic stresses. Tapping into this natural reservoir to identify key traits is made possible with innovative and powerful genomics and computational strategies for identifying, measuring and mapping variation on a genome-wide scale.

Our mission is to work with collaborators on developing the genetic resources to immortalize this diversity and to provide advanced genomic technologies and associated computational strategies to identify valuable genetic variation in plants. The technologies we have developed include pioneering methods of reduced representation sequencing technologies to permit the identification and interrogation of genetic variation in large populations.  These “population genomics” technologies are designed to be highly flexible, scalable, cost-effective and adaptable to any population of plant or animal.  Innovations include methods for a high degree of sample multiplexing at a low cost to allow the simultaneous identification and genotyping of millions of genetic variants.  Much of our current work focuses on applying this technology to a wide variety of problems developing panels of thousands of genetic markers in mere weeks instead of years.

Measuring and identifying genetic variation can only achieve a translational impact when this information is accessible to scientists and breeders for crop improvement. Therefore, in parallel, we have developed a sophisticated computational and statistical pipeline to associate genetic variation with traits of interest and to provide genomic-assisted breeding methods for the development of new germplasm. These informatic resources will permit scientist and breeders worldwide to identify, map and introgress new sources of genetic variation into crops in respond to disease and pathogen epidemics.