Astronomy at Yale — the movie 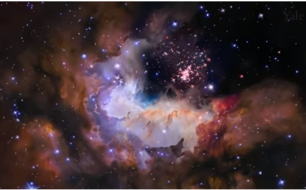 “Astronomy at Yale,” a new, 23-minute film about the faculty, students, and researchers involved in Yale astronomy — as well as their discoveries.  It’s a cinematic trip to galaxies far, far away.

“We have great stories to tell, and there is a real sense of excitement here,” said department chair Pieter van Dokkum. “Yale is leading in areas of research that didn’t even exist 15 years ago. We’re on the threshold of a new era in astronomy.”

The film’s director Jonathan Robinson of Build Pictures, spent more than a year on the project. He visited campus numerous times to conduct interviews, and also met with Yale astronomers doing fieldwork in Hawaii at the W.M. Keck Observatory, where Yale is part of a consortium with access to the world’s largest optical and infrared telescopes.

“Astronomy at Yale” is a story of exploration in more ways than one. It journeys to the farthest reaches of the known universe, but it also delves into the human passion for problem solving and the nimble inquisitiveness of Yale astronomers engaged in answering questions about space, time, and existence.

“Yale is really good at asking the hard questions and saying, ‘Where are those areas that are nebulous?’ ‘Where is the most uncertainty?’ That’s what we go after first, because the hard questions are the ones with the coolest answers, the best results — the things that I think propel the field forward,” graduate student Jeremy Bradford says in the film.

“I decided to come to Yale because of the ethos,” Nelson said. “It has this collaborative, creative, energetic, young ethos that, as far as I can tell, is entirely unique, and it allows this kind of science to happen that is entirely different than anywhere else.”

Natarajan’s assessment was similar: “We all want clarity in what we are studying,” she said. “We want a deep level of understanding, and so we are open to learning from each other.”

The film covers quite a bit of territory, both thematically and out in the cosmos. There are sections devoted to Yale’s legacy of astronomy research going back to the 1800s, its outreach programs at the Leitner Family Observatory, and the innovative work Fischer’s team of researchers is doing to build a new generation of astrophysics instruments.

There also are moments focused on black holes, dark matter, the wonder of discovery, and Yale’s emphasis on teaching students how to think like scientists. That last part — giving students immediate, hands-on experience in research — is of particular importance, according to van Dokkum.

“I personally enjoyed seeing that,” van Dokkum said. “It conveys a sense of what it means to do science at Yale. It is this environment of people who are excited and involved, within a community of scientists.”